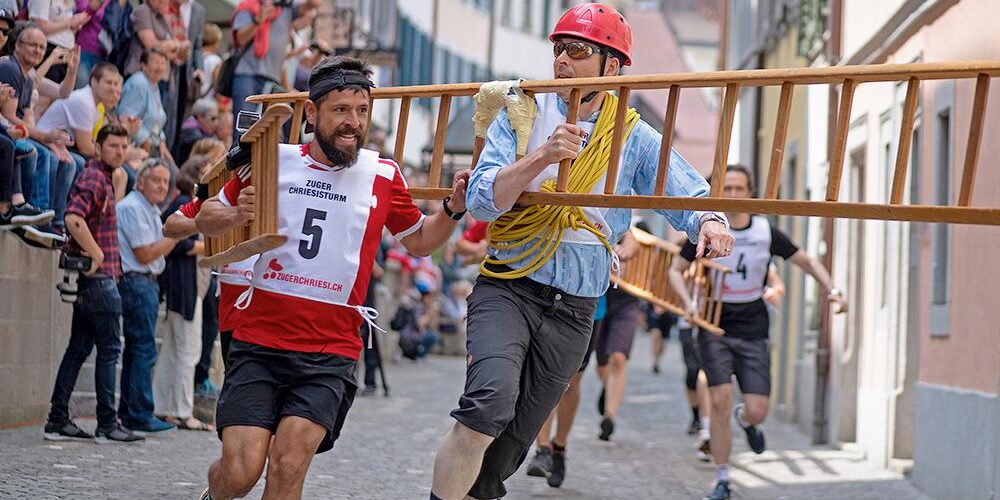 Old photographs from the late 1800s reveal that many Swiss villages were completely hidden by cherry trees. It is believed that the Romans, through Lucullus, brought the cultivated cherry trees to central Europe. However, in some areas, the trees did not survive and their numbers declined rapidly. In canton Baselland, orchards continued to thrive with thousands of old and new cherry trees. Cherry orchards start as close as Arlesheim and stretch out over the hills across to Gipf-Oberfrick. A short walk past Schonmatt in Gempen takes you to an orchard of over 2,000 cherry trees, which has been nicknamed, not surprisingly, “Kirschenland” (Cherryland). However, the little canton of Zug is known as “Switzerland’s Cherry Country,” and they celebrate the start of the harvest season with a most entertaining tradition—the “Chriesisturm” (Cherry Charge).
This 300-year-old tradition commemorates a time when the locals used to rush off with 8-meter-long ladders through the Old Town to start picking the cherries grown on nearby common land. While rushing to pick cherries is no longer necessary, they recreate this time with a special racing event! There are three races: a spectacular men’s race where five teams of two each carry an 8.1 m (26.5 feet) long ladder, a women’s race where five participants carry a special basket (“Chiersihutte”) on their back, and a kids’ race where five teams of two boys or girls carry shorter ladders.
The event opens at 11.00 on the Landsgemeindeplatz, and races officially start with the legendary ringing of the Chriesigloggä (cherry bells) on the church of St. Michael at noon. This marks the beginning of the men’s Chriesisturm ladder race (12:00), the women’s basket race (12:05 start), and the children’s Chriesisturm race (12:10 start).
The event, which marks the official start of the Zug cherry season, attracts a large audience and is one of the most important social events in Zug. The race is followed by the prize ceremony, musical entertainment, and a cherry feast, where visitors can enjoy a meal of cherry sausages, kirsch, and Zug kirsch cake on the Landsgemeindeplatz. From 15:00-18:00, the traditional Zug Chriesimärt (cherry market) will also take place on the square, where cherry farmers from all over the Zug region offer freshly picked cherries, including rare delicacies from high-trunk cherry trees. You can also buy cherry sausages, kirsch, cherry tarts, and other cherry specialties. So why not make a day-trip to Zug to witness one of Switzerland’s centuries-old living tradition.