Foot Puppetry Theater — The Foot Murder and Other Love Stories 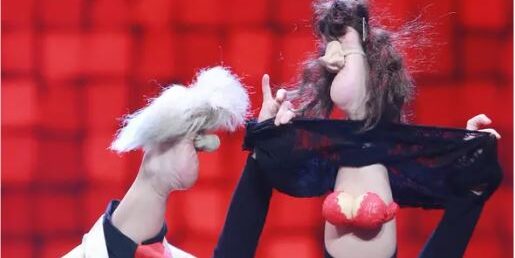 "The Foot Murder" is a story that has been viewed more than 40 million times on YouTube since Anne Klinge caused a stir on "Britain's Got Talent." “The Foot Murder" is a love story of a special kind: A cranky fisherman fishes in vain, because the mermaid who suddenly appeared is much too big for his pan. Then there's Rudi, the single waiter, who desperately takes care of his crying ladle baby, and even tinkers with a mommy for him. On the one hand there’s the single father, on the other a single woman muddling along in the household. But the household suddenly comes alive and ends in chaos. There's only one thing left for the woman—stripping until her feet are glowing.
Anne Klinge has performed all over the world: Spectacular performances at the International Comedy Festival in Sydney, in front of 2,000 spectators in the Opera House, Varieté in Japan, EXPO in Shanghai, and at festivals throughout Europe. Foot theater is staged body control at the highest level. Equipped with noses, caps, and robes, the feet suddenly transform into independent personalities that almost make the player behind them forgotten. “Anyone who thinks they already know everything that cabaret has to offer has not yet seen this foot theater.” Ideal for ages 12 and up, this theater piece is played entirely with the feet, without words.
Tickets are CHF 41.50 for adults and CHF 31.30 for students.