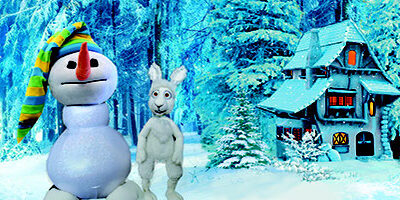 This holiday season, the Basler Marionetten Theater (Basel Puppet Theater) will once again be presenting “D' Frau Holle Macht Weinacht” (Old Mother Frost makes Christmas), a Grimm Brothers’ fairy tale. Frau Holle has brought the first snow into the country. The cold winter days are particularly hard on Muffel, the mountain hare. On his daily hunt for food, he not only meets Edwin, the snowman, but also Julie, a young woman who has gotten lost in the area. She tells the hare that she is looking for a spool that has fallen into a well. Muffel leads her to the wise and mysterious Frau Holle who welcomes them with open arms. However, Frau Holle always has a lot to do and she is expecting high-ranking visitors soon because Santa Claus himself is coming to visit her. Julie enjoys the time with Frau Holle but nevertheless she gets homesick after a certain time, so Frau Holle accompanies her to a large gate to return home. But only a few days later, Julie's stepsister Marie is standing in front of Frau Holle's house. She too should be a capable helper...
This Christmas puppet theater for families is played with string puppets, table figures, and the Holla Carol Singers. It is ideal for families with kids ages 5 and up and will be performed in dialect.
This special New Year's Eve performance includes a small apero during the break. Tickets for this special performance, including the apero, are CHF 28.