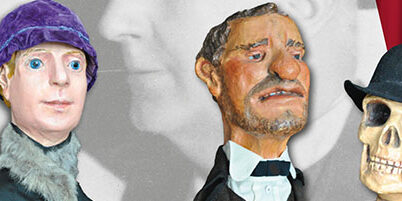 Edgar Wallace, the celebrated crime writer, has not been alive for a long time. Apparently, however, life has not yet let him go, because the murderer from his most famous criminal case was never caught. The "Ringer" was a master of the mask. One never knew whose form he had just assumed. And he was an exceptional case: where the police and the judiciary obviously failed, he finally helped out... but vigilante justice is vigilante justice, even if Wallace can understand it. And so, in order to catch the Warlock decades later, he has to listen to his therapist and use puppets to recreate the case in minute detail. However, his current team, all seasoned criminalists, is hopelessly overwhelmed with the new investigative methods. Should they let the puppets dance at Scotland Yard now? And does the Warlock drop his mask(s) at the end?
This is a first-class crime play, refined with three and a half players, original hand puppets from Scotland Yard's evidence room, and Edgar Wallace himself. It will be performed in high-German with some inserts of dialect; ideally suited for ages 12 and up.
Tickets are CHF 41.50 for adults and CHF 31.30 for students (for all dates except Dec 31). The presentation on Silvester (Dec 31) costs CHF 77.40 and includes an apéro riche.