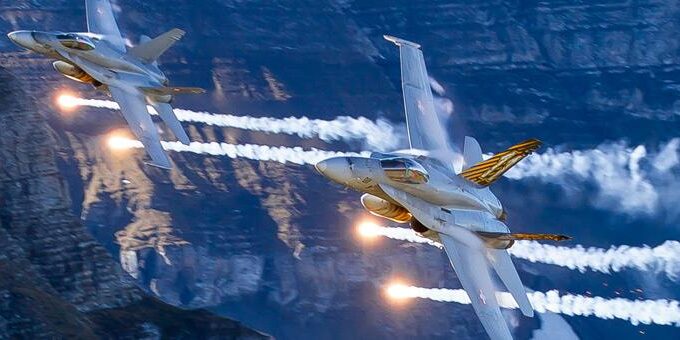 AXALP, also known as “Fliegerschiessen” (aviator shooting), is a flight demonstration of the Swiss Air Force. This year’s AXALP’22 will again attract thousands to Brienz in the Bernese Oberland. On this two-day event, the Luftwaffe (Air Force) will show their abilities to the general public on the shooting range Axalp-Ebenfluh (also called Äbeflue), where there is a designated spectator area at the summit of Tschingel, about 1 km west of the target area. The event is set to take place on Wednesday, October 19 and Thursday October 20, with a training session on October 18.
The performances start at 14:00, and the access paths to the Ebenfluh and Tschingel spectator areas will be closed after 13:30. The air force live fire event lasts for approximately 90 minutes. A commentary on the air performances will be given in all spectator areas via a public address system. The program includes F/A-18 gun firing in the mountains, the Cougar's flight characteristics, firefighting missions, air policing, parascouts missions, F/A-18 flight characteristics, PC-21 presentation, special forces operations, and Patrouille Suisse. Flight presentations are flown with F/A-18 Hornet and PC-21aircraft, and Super Puma, Cougar, and EC635 helicopters. The program is the same every day.
The spectator areas are situated at an altitude of 2,200 m above sea level, so be sure to wear warm and waterproof clothes and good shoes). To get there, you need to take a shuttle bus from Brienz to Axalp (located at 1,500 m above sea level). From there, you can reach the spectator areas either directly on foot (about 2-3 hours each way) or by taking a chairlift part of the way and then continuing on foot (about 1-2 hours each way). Note that especially for the longer route, you should be in good physical condition; it is not recommended for children under age 8 or for dogs.
While watching the flight demonstrations is free of charge, tickets are required for the shuttle bus and chairlift (the regular postbus service from Brienz to Axalp will not be running on those days, and the road will be closed to private traffic). These tickets are only available in advance through https://www.ticketino.com/en/EventGroup/Axalp-Flugvorfuehrung/4148. Adult tickets are CHF 55 for the shuttlebus or CHF 60 for the shuttlebus and chairlift (CHF 15 and CHF 20 for kids up to age 16). Chairlift only is CHF 15 for adults and CHF 10 for kids; passes for the duration (Tuesday to Thursday) are also available. The number of visitors is limited to a maximum of 4,000 per day on the show days and a maximum of 2,000 on training day.
Note that the event may be cancelled in case of bad weather—check the website for updates.