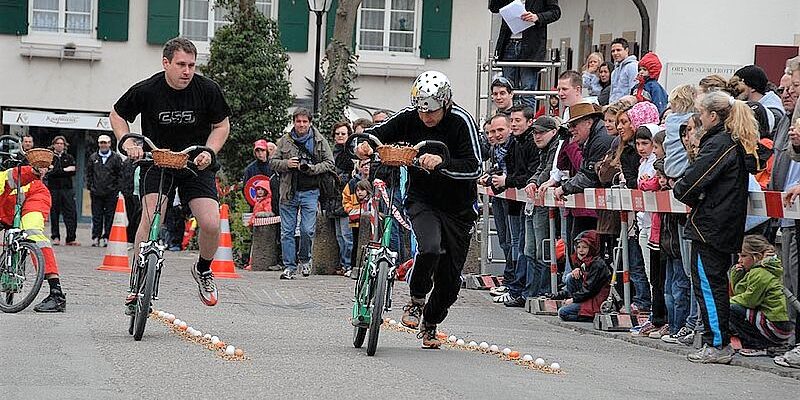 The Eierleset (aka Eierläset, Eierlesen, Eierauflesen) is an egg race that is traditionally held on the Sunday after Easter in some of the communities around Basel and which dates back to the 16th century. Today, these events are typically organized by local sports clubs and involve two or more teams of several gathers (kids and/or adults) and a catcher that compete against each other. For each team, about 100 eggs (mostly hard-boiled, but some raw ones as well) are laid out in a row on the street. Then, the gatherers take turns running from the starting line to the farthest egg in the row, pick it up, and run back to the start where they throw it to the catcher who tries to catch it in a big flat basket padded with grains and chaff, while the gatherer is off to pick up the next egg. For some of these runs, the gatherers also have to fulfill special tasks, such as walking on stilts, using a crazy bike, pushing a partner in a wheelbarrow, and the like. With these tasks and the eggs flying all over the place (and not always into the basket), these races can be rather entertaining to watch. And usually the remaining eggs are used afterwards for an “Eiertätsch”—a (free) meal of scrambled eggs to be shared by competitors and spectators.

To learn more about the history of this event, check our article "The “Eierleset”—Not Your Typical Egg-and-Spoon Race.".