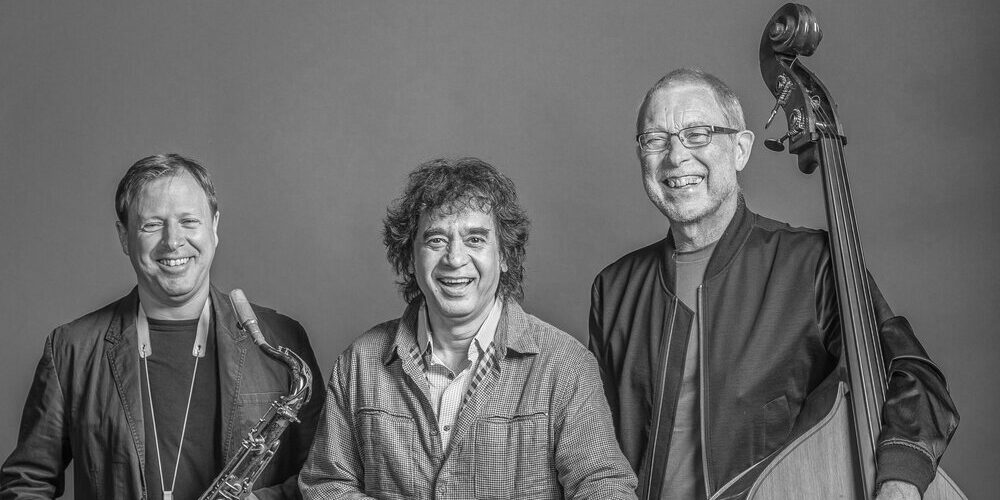 A grandiose fusion of jazz and Indian-oriental music awaits you on this evening at the Stadtcasino Basel.
Zakir Hussain is considered the most prominent tabla player alive and also plays numerous double-headed Indian tubular drums. Outside of India he is best known for his participation in John McLaughlin's group Shakti, recordings with various percussion ensembles (eg, Diga Rhythm Band, Planet Drum, Rhythm Experience), and his collaborations with musicians like George Harrison, Joe Henderson, Van Morrison, and many more. The North Indian musical tradition from which he comes still plays the most important role in his musical work. As he says himself, he plays 80 percent classical Indian music. The fact that he has long been recognized as a musician in his homeland is also shown by the fact that he is a sought-after collaborator of masters such as Ravi Shankar (sitar), Ali Akbar Khan (sarod), Shiv Kumar Sharma (santur) and the Kathak dancer Birju Maharaj.
Dave Holland studied at the Guildhall School of Music and Drama and played first with Alexis Korner, then as resident bassist at Ronnie Scott's Jazz Club in London, but also explored free jazz in the Spontaneous Music Ensemble of John Stevens and Trevor Watts. When Holland travelled to New York City, he first met Herbie Hancock—Miles Davis' pianist at the time—who introduced him to Davis. Holland then rose to international prominence through his involvement on Davis’ album “Bitches Brew.” Holland soon played with Chick Corea, Barry Altschul, and Anthony Braxton in trio and quartet. He also released solo albums and a duo record with bass colleague Barre Phillips, worked with John Abercrombie and Jack DeJohnette, and performed with Karl Berger. Holland is known as a composer with folk-song-like motifs, asymmetrical rhythms, and two-part or polyphonic themes (usually trombone and saxophone).
Tickets are CHF 33.10-88.90.