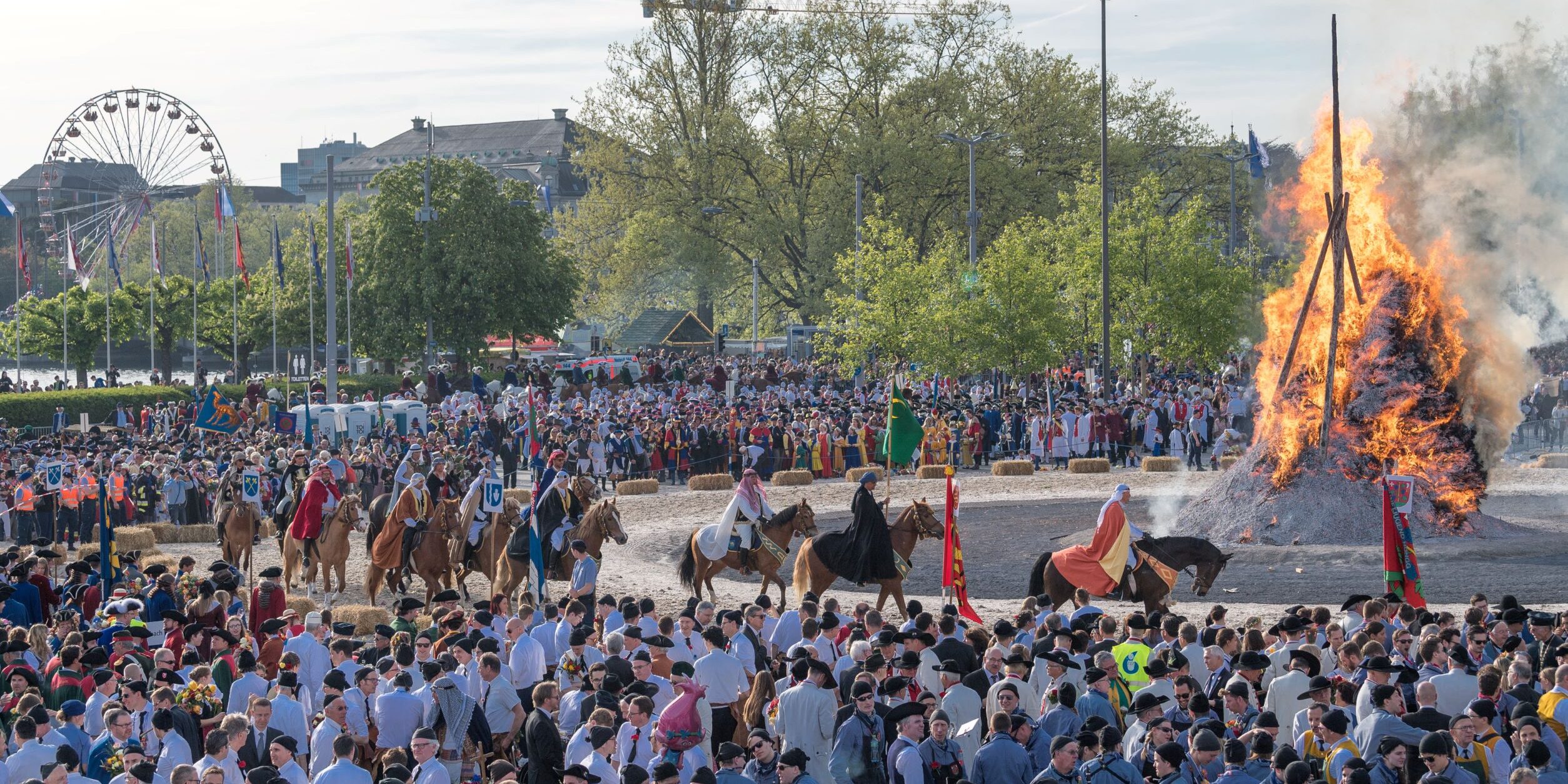 The coming of spring in Zürich is marked by a most peculiar traditional festival—the Sechseläuten, or “Sächsilüüte” as it is known in local dialect, which translates to “six o’clock ringing of the bells.” This tradition dates back to the 16th century, when in the winter months, workers would end their workday at 17:00 as they would run out of daylight. But with the coming of spring and longer daylight hours, the workday could be officially extended until 18:00. This transition would take place on the first Monday following the vernal equinox, when the bells of the Grossmünster (cathedral) would ring at 18:00 to proclaim the beginning of spring. Since 1952, the date for Sechseläuten has been moved to the third Monday of April, unless it falls on Easter Monday, in which case it would be the Monday before.
The main protagonist at the Sechseläuten is the “Böögg,” a snowman-like character that symbolizes winter. Historically, young boisterous boys in Zürich would tie Bööggs to wagons on the vernal equinox, pull them through the streets, and eventually light them on fire. Since this event, which was meant to drive out winter, coincided with the Sechseläuten, the two traditions were combined in the 19th century. The procession of jeering youths became what is now known as the children’s parade that is held on the Sunday preceding the Monday of the Sechseläuten. On the Sechseläuten Monday, events include the public burning of a giant Böögg—a 3.4-meter (11 ft.) snowman-like figure whose head is filled with firecrackers and which is placed on top of a 10-meter (33 ft.) pyre that is then set on fire. This ritual also serves as a sort of weather forecast, similar to Groundhog Day in North America: The faster the fire reaches the snowman figure and his head, causing it to explode, the nicer the summer will be. Incidentally, the Böögg was very accurate in his prediction for the extremely hot summer of 2003—in that year, his head exploded after a record-breaking 5 minutes, 42 seconds.

Sunday, April 24: The children’s parade, for which around 3,000 children ages 5–15 walk through downtown Zürich dressed in traditional costumes, starts at 14:30. The order of the parade corresponds to the historical classification of the costumes. Around 800 musicians from youth formations from the Zürich region accompany the marchers. The route is around 3 km long and leads from Bellevue to Quaibrücke, General-Guisan-Quai (to the level of the Kongresshaus), back to Quaibrücke, Limmatquai, Rudolf-Brun-Brücke, Bahnhofstrasse, Kappelergasse, Fraumünsterstrasse, and ending at Münsterhof. The parade takes place in any weather.

Monday, April 25: The Sechseläuten parade is the procession of the guilds to the bonfire and includes 3,500 guild members on foot, 350 horsemen, 50 horse-drawn parade floats, and 30 music ensembles. It starts at 15:00 at the lower end of the Bahnhofstrasse and finishes at Sechseläutenplatz, where the pyre with the Böögg is waiting. This march is a major event well worth seeing; it attracts tens of thousands of spectators to the city of Zürich and hundreds of thousands in front of the television screens every year. At 18:00, the huge bonfire in the middle of the Sechseläutenplatz is lit and the crowd watches and cheers as the pyre burns and finally reaches the Böögg, culminating in the explosion of its head. An official public sausage roast ensues at 20:00, when people of all ages gather around the remains of the bonfire to barbecue their sausages overs the lasting embers—often referred to as the “After-hour of the Böögg.” Swiss tradition at its strangest…