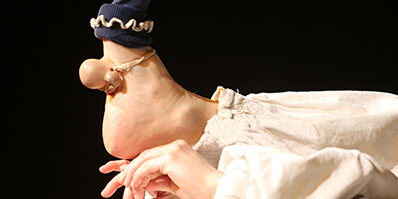 After the miller died, the eldest son got the mill and the middle son got the donkey. But all that was left for the youngest son, the good-natured Willibald, is Casimir—a cuddly toy with boots. He is only a cat, but this cunning fellow not only wins Willibald the friendship of the greedy king, but also the love of the princess. But naturally a trick is needed, because what greedy king would give his daughter to a miller? The clever Casimir knows what to do, and now Willibald has his hands and feet full disguising himself—as a farmer, as a forester, even as a gardener, and he constantly claims that all the land around belongs to Count Willibald. But a count must also have a castle! There would already be a castle, but unfortunately it is inhabited by a powerful and evil wizard. Will the cat come up with an idea?
This theater will be played entirely with the feet, by guest artist Anne Klinge, who first got recognized for her special art-form on “America’s Got Talent.” The language is high-German.
Tickets are CHF 15.80 for kids and CHF 21 for adults.